On our return visit to Lima we stayed two travel days, plus two full days and my affection for the city only grew stronger.  Luckily our friend Pablo let us stay at his apartment in the swanky Miraflores district of Lima, and luckily for us, his apartment just happened to be on the 8th floor with a balcony overlooking the coast. Pablo had a well-planned itinerary and was a great guide.  He took us on a walking tour of the old Lima that included a stop at the century-old bar in Lima, Bar Cordano, for lunch. It was nice to mix it up with their delicious hand carved pork sandwiches but I’ll admit, I longed for seafood until a short time later when we were momentarily distracted by a smell so intoxicating that we had to follow our noses to find the source.  They led us straight to another of Peru’s culinary accomplishments, pollo a la brasa.  Basically, it’s rotisserie chicken.  But it’s so much more than rotisserie chicken.  There were a bunch of chickens on spits, cooking slowly over glowing, hot coals, and served with a spicy pepper sauce that can’t be duplicated because we don’t have the aji chile pepper at our disposal. 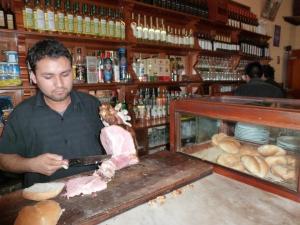 Pablo wanted to take us out of the heart of Lima on our second day, but first we needed sustenance.  And boy, did he deliver!  He took us to Tanta, which is another of Gaston Acurio’s establishments, specializing in Peruvian-Japanese fusion food.  This deserves a little bit of an explanation.  What makes Peruvian food so good is that it is rooted in both indigenous and Asian flavors.  At the end of the 19th century a group of about 800 Japanese people migrated to Peru with dreams of mining for gold and farming, and they basically started a light trend. Although the population of Japanese-Peruvians isn’t much more than .3 percent, over the years the Japanese food culture became mixed with the local indigenous food culture and the result was pure magic.  Think Asian stir fry-meets coastal-meets-Andean Indian food.  That’s the influence behind the bistro fare at Tanta.  Sadly, I can’t recall the name of what I had.  But it was toasted, thick, country style bread, served on top of an Asian-style beef pan sauce with wok-fried vegetables, AND AN EGG ON TOP!  Personally, I hate when people put eggs on top of things just to make them meal-worthy.  But this was breakfast, and there’s supposed to be an egg on top!  It was a winning combination, dear reader. This is the breakfast of my dreams, and there was nothing sweet about it.   It was savory and and satisfying, the kind of breakfast that leaves you longing for a nap and stretchy pants.  My dining companions ordered other delicious things, like spring rolls and scrambled eggs with chorizo, but I feel I won that round.  My entrée was the best.  See, here it is below: 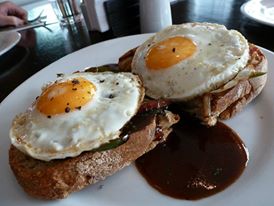 After Tanta we headed out to Caral.  You’ve probably never heard of the Caral ruins before, though it’s literally the second oldest discovered ancient civilization on Earth, after Mesopotamia. We got a little lost because South Americans generally don’t believe in road signs.  And even if they don’t know where something is, they’ll send you where they think it might be.  But lo and behold, we found the tiny sign painted on a rock, pointing to Caral.  It is an active archeological site, and fairly recently discovered.  We took a tour and were shown all of the areas of importance by a very knowledgeable guide.  There was hardly anyone there, which is surprising, considering how many people visit Peru.  If you’re ever in Lima, it’s worth a trip out there to see and explore.  It’s worth mentioning that the drive back was a little strange, almost like the sand, the ocean and the sky were the exact same shade of heather gray.  It made me feel like I was on another planet. 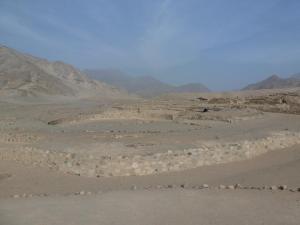 On our last full day we did a lot of local sightseeing, visiting places where they make handmade crafts and artwork, and saw some local traditional Peruvian dances. We got a little hungry so Pablo took us to another great place, called Pescados Capitales (capital fish) which is cleverly designed to sound like pecados capitales (capital sins), and the menu items are named after the seven deadly sins: greed, wrath, sloth, pride lust, envy and gluttony.  My favorite dishes were the conchitas (scallops).  We had one plate that was raw with jicama, fresh summer peas, red onion, cilantro, peppers and corn (to die for, by the way) and another plate broiled with melted parmesan.  I’d go back and order both of them in a heartbeat.  But we had to save room for dinner, and I’m so glad we did. 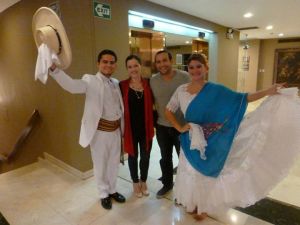 Our last meal was at Fiesta in Miraflores.  It was the perfect way to end our truly memorable time in Lima.  Fiesta is a place that specializes in northern Peruvian Chiclayo cuisine, and you can smell the Andean spices when you walk in.  It felt a little upscale for us, since we were dressed very casually, but the staff treated us nicely.  Pablo urged everyone to order the arroz con pato (rice with duck) but I decided to go my own route.  Silly me.  Since I liked the Asian flavor at Tanta so much, I ordered lomo saltado, which is marinated beef tenderloin cooked in a wok with tomatoes, onion, aji peppers and soy sauce.  Delicious?  Yes.  But my other half took Pablo’s advice and ordered the arroz con pato.  It came in a steaming pot that smelled of heaven.  I realized my mistake when he didn’t immediately offer me a bite.  He had beaten me at this round and I had major order envy. Finally he felt sorry for me and gave me a bite.  And that’s the moment my life changed, folks.   The duck was so tender.  And perfect.  The taste…mind blowingly good.  Genius, really.  Frankly, I don’t know why Fiesta has anything else on its menu.  In this simple, regional dish, rice and duck cook together with coriander, pumpkin (a special local loche breed), peppers and corn to create the single most stunningly good thing I’ve ever eaten.  You could throw every positive adjective in the dictionary at this dish and it would probably still fall short of describing how truly special and wonderful it is.  There has to be a little bit of magic something in there, I’m sure of it. 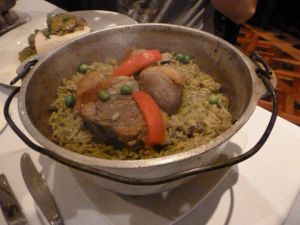 And so that was the moment when I knew, without a doubt, that I had passed the point of no return.  Lima had made me fall head-over-heels in love.  In the end, I had to leave her, but Lima is the equivalent of the one that got away.  Maybe our stars will align again someday.  Here’s hoping.

2 responses to “My Love Affair with Lima: Part II”